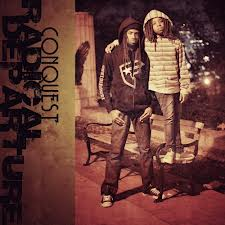 It took me a while to getting around to write this review because I wanted it to be as unbiased as possible. Considering that Conquest is one of my dearest friends within the industry, I did not want for my excitement to overshadow an accurate review of his latest release, RADICAL DEPARTURE.

Now that I have had a chance to listen to the album several times over; and, allow the full brunt of it to soak in, I think I can render an honest review . . . .

Here’s a nice little grocery list for you to consider:

Radical Departure is eclectic. It boast of a variety of productions styles that all seem to fit effortlessly into place on this album. Admittedly, I am not a fan of every style of music that Conquest chose to compile this masterpiece; however, as a fan of music in general, I would be at a loss not to acknowledge that the production choices are as skillful as the tracks themselves.

Radical Departure is personal. Most artist will claim that their music is personal when they release a new album for consumption; and, for the most part, they are correct. Radical Departure, on the other hand, immediately draws you in with its uncanny ability to transfer the emotion, confusion, joy and pain of Conquest directly to you – the listener. There were times throughout the album, especially during Lyricist Of The Year, The Accused, and You Ain’t Bout That Life that I felt as if Conquest took a page from my personal history and used it to craft these songs.

Radical Departure is relevant. This album is not just some random collection of songs that was thrown together for the sake of making an album. Rather, it is a methodical journey that is being experienced in real time; and, relates to the world that surrounds us. The subject matter is deliberate. As well, it goes beyond exposing a relevant truth, it offers a relevant call to action as a result of those truths.

It’s not often that you will hear me say that any album is ‘perfect’ in its present state – not even with my own music; however, I am hard-pressed to find anything that needs to be improved with Radical Departure. If I must be critical, again, I am not a fan of some of the bounce/crunk style tracks; however, as I stated previously, even those round out this project very well. The lyrics and delivery are spot on; and, the use of varying musical styles lends to the diversity of Conquest as an emcee. So even though, I may fall just shy of calling Radical Departure the ‘perfect’ album, I will stand firm in my observation that there is nothing that needs to be changed about it.

If you are a fan of hip-hop, you will appreciate this album and, like me, consider it a must-have for your collections. There is something for everybody on Radical Departure; and, Conquest does a good job of making sure that all flavors are well represented. with that being said, this section is the only place where I will share a biased opinion.

There are some gems on this album, again, according to my personal preferences, that are definately noteworthy. Those would include R.A.G.E., The Machinist, Concealed Weapon and Bryant’s Theme. I also found The Accused and Whoever You Are to be quite noteworthy. My favorite track on the album, however, is Lyricist Of The Year.

I first heard it on the b-side of You Ain’t Bout That Life; and, I immediately fell in love with it! I guess there is something about the strings along with the delivery and relevancy of the lyrics that just sets that one apart for me.

If, for some reason, you still do not have Radical Departure as a part of your collection, I strongly suggest that you get it. It is relevant truth; and, music so good that I happily paid $10 to get it!